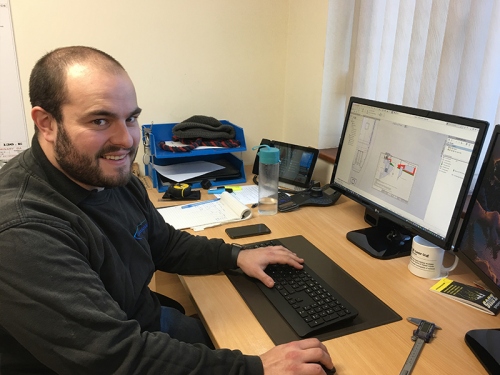 A forward-thinking Great Yarmouth company is investing in its people of the future by training and supporting a raft of next generation young staff members.

Boat builder Goodchild Marine has employed 10 new trainees, all 25 and under, who are being offered skilled training in multi areas.

The award-winning business in Burgh Castle, is one of the UK’s industry leaders renowned for its flagship range of ORC pilot vessels, which has attracted orders from The Port of London, Dublin Port Company and Cattewater Plymouth.

In line, with Look Beyond, this year’s theme for National Apprenticeship Week, the latest recruits are receiving diverse training, sponsorship and support in skills such as electrics, lamination, carpentry, engineering and boat building.

Some are specialising in specific fields, while others will take up the opportunity to develop expertise in more than one skill.

Jamie Paul, 20, has swapped his career in retail to train as a laminator after relocating to Norfolk, following many family holidays in the county.

His work has extended to Leader, the UK’s first ever hybrid pilot boat.

He said: “The company has offered me lots of opportunities to try different trades – but I think laminating is definitely my favourite. I’ve really found my niche.
“My future ambition is to become a supervisor. Lots of people start here as trainees and work their way up; few people leave because it is such a great place to work. I never find myself not wanting to come to work, even with the 6am starts.”

Simon Cross, 25, is the company’s new Design Engineer, who, sponsored by the team, will shortly begin studying for his chartership.

He works with customers to design, research and develop their vessels, while Aaron Hudson, 19, the youngest new recruit, has left his job as a lifeguard to train as an electrician.

Aaron Cooper, 23, has only worked for Goodchild Marine for five months, and is already spending three days a week at the site of one of the company’s clients, as a maintenance engineer.

He said: “I am really happy to have been trusted to represent the company outside of the yard. Boat Builders Goodchild Marine is always open to trying new things and they give employees the chance to learn other people’s trades.
“They are a really family-based company – everyone is really friendly and straight up. They think about what’s best for their employees.”

Steve Pierce, General Manager at Goodchild Marine, said investment in training was part of the succession plan.
“We are really impressed with our new raft of employees. They all bring something different to the table and display the talent we need to keep our business running way into the future.

“We are extremely proud of the fact that they are local. It’s been an issue for several years to recruit locally and we are hoping that our reputation in the industry is helping to attract people to train with us and stay in the area.”

Jamie Paul, 20, Laminator
Jamie heard of a position at Goodchild Marine through his father, who is an engineer for the company.

The family moved to Great Yarmouth from Harlow in Essex, after holidaying for years at Cherry Tree Holiday Park in Burgh Castle.

Despite studying media and sport and working in retail, Jamie was attracted to a career change by the opportunity to learn multi skills.

He said: “Everyone here is so friendly, and the company has offered me lots of opportunities to try different trades – but I think laminating is definitely my favourite.

“I’ve really found my niche and I can’t see myself doing anything different now. I love the satisfaction of the job and being able to constantly monitor my progress.”
Jamie’s workmanship has been included on the UK’s first hybrid ORC pilot boat  - Leader, for The Port of London Authority and laminating Lowestoft’s new pilot boat Kingfisher.

He said: “My future ambition with Goodchild Marine is to become a supervisor. Lots of people start here as trainees and work their way up; few people leave because it is such a great place to work. I never find myself not wanting to come to work, even with the 6am starts.”

Simon Cross, 25, Design Engineer
Simon from Caister studied mechanical engineering at Birmingham University and was familiar with Goodchild Marine, as both his father and grandfather had previously worked in the marine industry.

“I’m not sure that my role is one that people immediately think of when they think of a boatbuilder, but as a design engineer I’m the start of the story for our boats.

“I work with customers to design, research and develop their vessels. I also have to re-think design elements to make them suitable for transport. I’m currently redesigning our Man Overboard Platform to streamline the process.”
Simon is just about to begin studying for his chartership, making him a chartered engineer, which is being sponsored by the company’s Managing Director Alan Goodchild.

“I didn’t originally have myself down as a design engineer when I first left university, but my chartership is not only a great opportunity for myself, but it also raises the profile of the company and promotes the many opportunities they offer.”