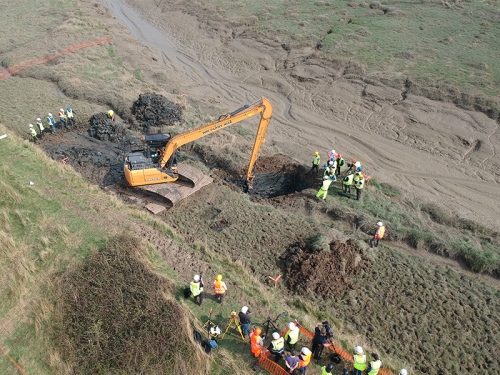 Shropshire based specialist plant hire firm, WM Plant Hire were privileged to be a key part of the team involved in the unearthing and careful excavation of an iconic World War II plane in Essex last Saturday.

The RAF MK1 Hawker Hurricane fighter plane recovered is one of the last of the 1940s war planes to fly in the Battle of Britain sent up on August 26th, 1940 to defend the country’s airfields against the Luftwaffe.

The 21-year-old pilot, Paddy Hemmingway survived this and was shot down several more times during the war, showing true bravery and steely determination and now lives in Ireland aged 99. He is one of the last 5 surviving Battle of Britain pilots. He was hit from behind after a dog fight with the Luftwaffe and with his engine in flames decided to bail, thankfully landing safely. His plane plummeted some 17,000 feet to the ground landing near the Thames Estuary close to Basildon.

Many decades after the crash, a team using modern imaging technology has been able find and then secure permission to excavate the plane. After 80 years it is “…quite unique to find one in these ground conditions where it's almost all still there," said project co-ordinator Gareth Jones.

Alongside other volunteers from Shropshire, WM Plant Hire supplied their specialist low ground pressure long reach machine on Saturday, ideal for excavating some 5 metres down into the soft ground of the salt marshes, recovering the plane piece by piece. These fragments of the plane including part of the famous Merlin engine, with Rolls Royce plate still attached, will now be carefully cleaned and restored. The hope is that if enough can be salvaged the plane might even be rebuilt, forming part of a TV documentary series.

The Midlands based company’s specialist excavating equipment and experienced operators are regularly involved in heritage restoration works nationally, including projects for the National Trust, English Heritage together with emergency works.

Damian McGettrick, of WM Plant Hire, said “It was great to be involved with such a prestigious and historic event and the entire team were rewarded with such a significant find.”