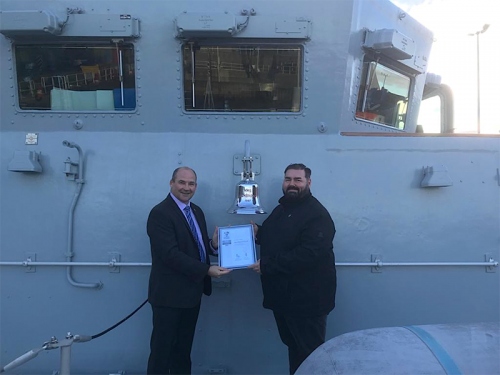 Dales Marine Services achieve a silver award for the Ministry of Defence Employer Recognition Scheme. Dales Marine is delighted to receive the award, marking the company’s commitment to supporting the Defence and the wider Armed Forces community.

As part of the Award, Dales Marine Engineers had to meet and demonstrate a range of criteria, including employing serving and former Armed Forces members, delivering a flexible training and mobilisation commitment for Reservists and Cadet Force Adult Volunteers.

Dales pledged, demonstrated, and advocated support to the UK Defence and Armed Forces, aligning the company’s values with those of the Armed Forces Covenant.

The Armed Forces Covenant is a promise by the nation to ensure that those who serve or who have served in the armed forces and their families are treated fairly.

On receiving the Silver Award for the Ministry of Defence Employer Recognition, Michael Milne, Chief Executive Officer, Dales Marine, said, “We are very proud to support the Defence and Armed Forces community, supporting those who serve our country.Dales Marine recognises its responsibilities in supporting service leavers and veterans by offering them employment, training, and a new career path within the marine industry. We also look to support reservist and family members of serving military personnel and the forces community.”

Dales Marine Assistant Manager and veteran Robert Hall said “From experience, some forces personnel can struggle with the transition into a civilian working environment, always feeling the need to be on the move (job to job). Veterans who’ve joined Dales Marine Engineers, are still here; A testament to the company and its working environment.”