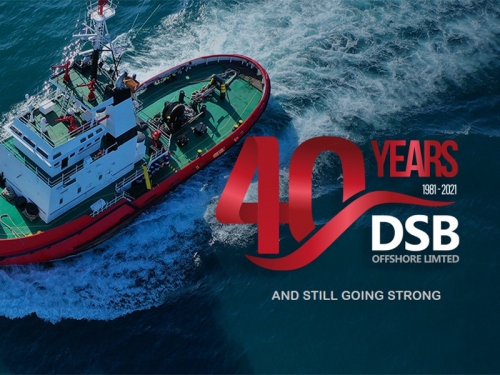 When David Durnford-Slater and Johnny Buxton (the ‘D-S’ and ‘B’ of DSB) launched DSB Offshore in January 1981, they did so with some trepidation. Whilst the oil price was at its peak and the masses expectantly awaited the Royal Wedding, there was also job uncertainty, social unrest and political tensions with the IRA featuring prominently in the UK headlines.

Psychologist Carl Jung once commented “Life really does begin at forty. Up until then, you are just doing research.”

As DSB celebrates its ruby anniversary, we reflect on how the last 4 decades of ‘research’ have taught us the values of niche specialisation, strong relationships and flexibility.

From Oil & Gas to Marine Civils and beyond – diverse yet specialist

The DSB venture began as a consultancy in the Oil & Gas Industry with David working out of his family home (pre-teen children under foot). Within a few months they turned their hands to brokering the sale and charter of drilling jack-ups and semisubmersibles.

With the crash of the oil price in 1986, DSB transitioned from O&G via jack-ups, into the world of marine civils.

Jack-ups, the key piece of equipment in these projects, also took DSB into port construction (particularly LNG terminals), and renewable energy.  Indeed, in 2003 DSB had the privilege of providing most of the marine plant for the North Hoyle project, Wales’ very first offshore windfarm and the UK’s first major offshore renewable power project.

Through our work in marine civils, and strengthened by the acquisition of Yarmouth Shipping in 2006, DSB established its position as ship brokers of port tugs and support vessels such as workboats, splitbarges, floating cranes and flattop barges. And in the latter years, dredging and trans-shipment have become key focuses.

Curiosity about cultures and love for languages runs deep in the Durnford-Slater family. So it’s no surprise that DSB is a distinctly international brokerage.

Despite delving into diverse markets, DSB shipbrokers remain specialists. Thus, over the years they have found themselves working closely with multinational majors in their sectors – such as Shell (O&G), Bouygues (Construction) and Jan De Nul (Dredging).

David Durnford-Slater would often jokingly refer to the company as the “odds and sods” brokers of the marine industry. Our vessels are often difficult to categorise, few in number and rarely to be found on standard shipping databases. You cannot, for instance, pop a dredger in your Amazon basket!

Thus, when asked at a dinner party, ‘So what do you do?’, the answer will often receive a puzzled look or the subject is quickly changed!

DSB is first and foremost a family company.

When in 1999 the ‘B’ in ‘DSB’ retired, David’s son, Roland joined the crew fresh from several years living in Russia.

Then in 2015, after 15 years working side by side, David Durnford-Slater retired and Roland took the helm.  (David still reads emails and regularly brings his perspective to bear on thorny shipbroking questions).

The family business model places emphasis on training, development and nurturing long term relationships both within the company, and with clients.

Several eager young brokers, some of whom had had no previous marine experience, ‘grew up’ in the DSB ‘family’ and have since become, competent, specialist brokers.

Some have remained with us. Others have spread their wings – indeed one gaining fame in the national press for having recently circumnavigated the globe single-handed in a 28foot yacht (Thom D’Arcy, we look forward to reading your book)!

According to JP Morgan, the ability to weather change and compete over decades—and longer—is a primary metric for the success of any business.

As a small brokerage, DSB is able to respond quickly to fluctuating markets – on occasions modifying market emphasis, diversifying vessel specialisms and changing geographical focus (E.g. The Caspian in the 2000’s and now Africa), whilst maintaining core specialisms and values.

The workplace too, has changed over the last 40 years.

Then came the information boom of the nineties and the noughties and the opening up of the Russian market.

DSB has faced, been challenged by, and adapted to changes in office politics, ISO standards, to sanctions and embargos in different parts of the world, to changes in banking such as increased KYC requirements and to new virtual technology.

David was once heard to announce, rather sceptically, “Websites will never take off!”

In time, though, DSB has learnt to balance the efficiencies of marketing by website and social media, with real human interaction with our clients.

Then came 2020! Brexit was upon us and the COVID pandemic ground down our sectors.

As for many others in the shipping world, this brought with it a huge shake-up for DSB.

Our shipbrokers now all work from home (once again with small children underfoot!). We’ve swapped our cumbersome desktops for laptops and moved data onto ‘the Cloud’.

If anything, DSB is leaner and nimbler than ever before.

Our Work is fundamentally interesting. We participate in awe-inspiring engineering projects all over the world.

Every enquiry is different, every project a challenge.

Every day we operate in the ‘big toys for big boys’ realm, and we love it!

We could bore you with 40 years worth of stories. But here are some of the more unusual enquiries that have come our way: Iceberg watching in the Arctic (BBC); transport of Noah’s Ark (lifesize replica, of course!); towage of bags containing hundreds of thousands of tonnes of fresh water from Turkey to Israel; tankers for transporting faecal water in the Caspian; transport of Zeppelins in dock vessels; barges to land parts of space rockets; barges for yacht parties in the Adriatic; vessels for supporting deep sea mining; moveable Heliports for the Thames; rescue vessels for refugees in the Med; breaking ice in the Caspian Sea; frontline floating accommodation for British troops; vessel for torpedo testing range; huge barges as platforms for offshore floating power plants; hovercraft; de-licing vessels for Scottish salmon farms and walking jack-ups for diamond mining in Namibia.

It’s an extraordinary privilege to work in this industry with all its ups and downs and shifting horizons.

We’re proud to still be in business after 40 years.

We look ahead with great optimis