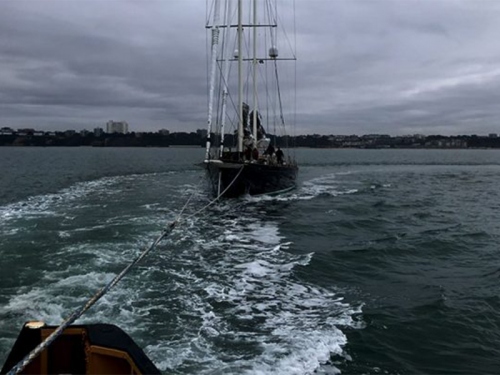 Jenkins Marine recently received a call at 4am from the skipper of a 41m sailing yacht that had lost power (It was later discovered it had net caught in its prop). As there was no wind she could not return to port under her own steam. Thankfully the conditions were ok so we mobilised the tug ‘Polmear’ with crew to meet her near Bournemouth Pier within a few hours of receiving the call.

Motor Tug POLMEAR is a twin-screw tug, certificated under the MCA Workboat Code of Practice for operation up to 60 miles offshore. She normally provides towage and survey works throughout the UK and her powerful 880 hp engines combined with a very experienced crew enabled her to find and safely return the stricken yacht to Ocean Village in Southampton.

Jenkins Marine are always ready and able to respond to tug or tow emergencies along the South Coast and have procedures in place to handle this type of call at any time of day or night. If you are in trouble then call the main number; 01202 668558 and it will ring through, if you leave a message someone will call you back as soon as possible.