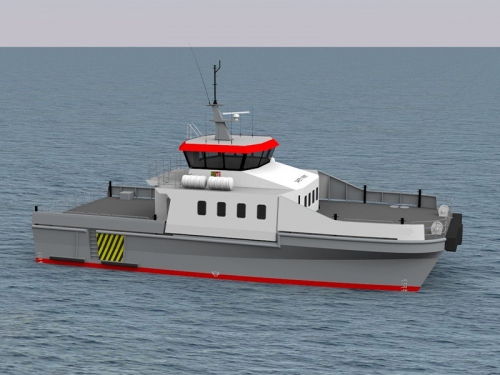 Mainprize Offshore’s new 26m SUPA-SWATH will reflect the innovative design of its sistership, the MO5, which was unveiled at Seawork in 2019.

The 26-metre vessel is the second vessel in a new range of CTVs being the brainchild of Bob Mainprize, the co-owner and MD of Scarborough-headquartered Mainprize Offshore, together with James Walker of Southampton’s Walker Marine Design (WMD).

The duo has previously partnered on the design of three vessel builds prior to MA1; namely the MO3, MO4 and MO5.
Bob Mainprize first thought of the initial design in 2011 when assessing offshore wind, the vessels’ current and future designs and the end clients’ needs; with the aim to building the industry’s leading vessel, being a SUPA-SWATH able to carry large loads, enable transit in higher waves and in greater comfort, plus transfer in higher wave height.

Its complex design, being to UK Flag HS OSC and BV Wind Farm Service Ship S1 notation, was devised to maximise efficiency, crew and passenger comfort and is part of the continuing evolution of the Mainprize Offshore line of vessels, being renowned as leaders in their class in providing a high-end value-added and cost-efficient service.

Following the year-long construction programme of the MO5, which was launched in Spring 2019 and is due to start operations in Germany imminently, the MA1 will have a shorter build programme of nine months and will be built in Taiwan.

With a combined investment of over £7million spanning the two 26 metre sisterships, MA1 has been ordered on speculation.

Uniquely, the MO5 is one of the few vessels in today’s market which can transfer in over 2mHs. She also offers the added flexibility of carrying 70T of payload including large cargo and undertake survey or ROV operations. In addition, her four-point anchoring enables her to undertake external dive operations with the added safety of been able to carry a full dive suit.

Predominately designed as a ‘bring-to-work’ and high-speed cargo-carrying solution for wind farm operatives and their equipment, the semi-SWATH high-load design, which carries 24 passengers with six crew members, is also suitable for many other operations.

Bob Mainprize, MD and Founder of Mainprize Offshore comments, “the MA1 is a continuation of Mainprize’s focus on pushing the offshore wind farm vessel envelope. The MO5 helped to cement Mainprize Offshore as a leader in innovative fast workboats and MA1 will continue this as another pioneering build to further complement our fleet of CTVs.”

Mainprize is renowned for numerous marine industry firsts including; Deck Space of 150M2 increasing to 200M2, dedicated walkways for safe access and egress, 36,000L increasing to 50,000L fuel, achieving a payload of 65T – 200% greater than anything in the wind farm sector at the time and a fuel pump speed 500L-Min – 200% faster like-for-like.

Mainprize Offshore has been involved with the early stages of the wind farm industry starting with the initial seabed surveys, risk assessments and traffic surveys. In recent times the business expanded into the operation of fast catamarans to support the wind farm construction and O+M teams; enabling transfers between shore and wind farm sites of personnel, equipment spares and stores.

The combination of unsurpassed seagoing, together with the ability to operate impressively in wave heights of over two metres, means that Mainprize Offshore’s MO and MA fleet is also ideally suited to fast-ferry, survey, pilotage and SAR (search and rescue) duties.

Mainprize Offshore’s MA1 is due to be launched in May 2020 when she will commence operations in Northern Europe.