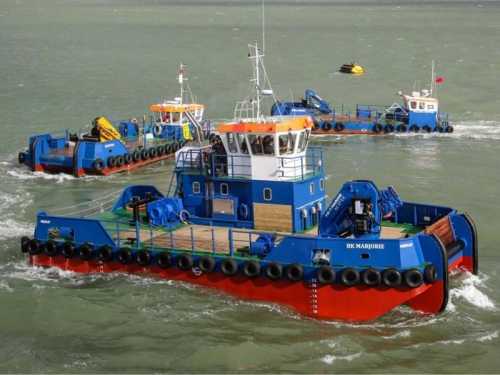 Meercat Boats is celebrating a decade as the UK leader in the innovative multirole vessel build concept.

Since its first build in 1997, Meercats had become renowned as a builder of steel workboats suited to a multitude of tasks.

For the past decade, Meercats have been pushing the envelope with innovative multipurpose vessels, which have been specifically designed as a single vessel replacement of several workboats in a fleet, being the Meercat. In 2019 Meercat coined the phrase, MultiRole Vessel (MRV).

The Southampton (UK) headquartered Meercat Boats’ philosophy is simple. Top quality, cleverly designed and British-built, robust steel workboats that can successfully turn their propellers to more tasks than any other vessel in its field.

Meercat Boats are also found operating across all corners of the globe. From ship servicing in the port of Southampton, to marine civils in Norway, through to aquaculture support in Tasmania and oil spill response in the Middle East, these vessels are unique in their versatility.

To date, all Meercats ever built are still in operation, with many taking on further tasks than planned when they were originally purchased. The Meercat concept began as a road transportable multi-purpose workboat, which in time also expanded to include conventional hull versions. Despite no two Meercats being identical as each vessel is specifically designed for the role it will perform, all Meercats represent the same values of versatility, longevity and robustness. In addition, they all boast superb stability and manoeuvrability.

Many of Meercat’s original in-house build team remain, ensuring consistency and efficient working. Thanks to the excellent levels of build quality and support, Meercat Boats is also highly successful in achieving repeat business, with the likes of Williams Shipping, BK Marine and Topbond operating fleets of Meercats.

Visit www.meercatboats.com to find out more.