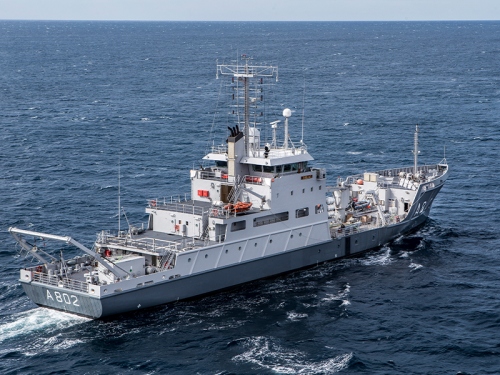 FarSounder’s Forward-Looking Sonar (FLS) is the latest in innovative maritime technology to be included on the Royal Netherlands Navy’s (RNLN) hydrographic survey vessels, the HNLMS Snellius (A802) and HNLMS Luymes (A803). The company's 3D sonar systems will provide real-time data on what lies ahead under the water as the ships navigate the seas, giving both crews an elevated sense of safety and security as part of their mid-life upkeep (MLU).

These ships’ missions will be both military and public safety operations. However, the primary task of these vessels is to perform hydrographic survey duties in both the North Sea and the Netherlands Antilles. These duties include rapid environmental assessments, in addition to bathymetry and route surveys. Ultimately, these vessels will collect data for the Hydrographic Service of the sea.

One of the most useful applications of the FarSounder FLS for these vessels is its Local History Mapping (LHM). This capability allows for true real-time mapping of the seafloor. This map updates every two seconds and will have the ability to be saved for future use. It will be most advantageous during the ships’ post disaster missions. On these types of missions, the ships will be tasked to collect data in areas of concern after storms when bottoms can shift and debris is inevitable.

Along with these new hydrographic survey vessels, the Royal Netherlands Navy fleet is heading to Damen Shipyards Den Helder for an extensive upgrade program. The two vessel projects being fitted with FarSounder FLS are contracted by Radio Holland Netherlands B.V, one of FarSounder’s dealers. In addition, Sally Dale, of Pinpoint Electronics, was instrumental in introducing the RNLN to FarSounder’s technology.

With the FarSounder FLS aboard, these vessels will have the advantage of having real-time 3D data that updates at every ping on their bridge. FarSounder's sonar will be critical as they carry out a variety of operations by providing both reliable navigation and the ability to perform duties safely as they set out to explore the lesser charted areas of the world’s oceans.

About FarSounder
FarSounder, Inc. is a U.S. based high technology marine electronics manufacturer specializing in underwater acoustics. With unique patented technology, the company has a global customer base of commercial, government, and private sector users. The company is the recognized leader in real time 3D sonar systems and has been selling its flagship navigation and obstacle avoidance systems since 2004. FarSounder's product lines include its Ship Protection System, which followed years of both IR&D and U.S. government funded research. The 2015 Tibbetts Award winning FarSounder Ship Protection System is for those owner/operators who demand the best solutions for ensuring the safety of their passengers and crew. The system provides detection, classification, and alarms of underwater threats. Portside, platform, and shore based systems are also available for waterfront security.