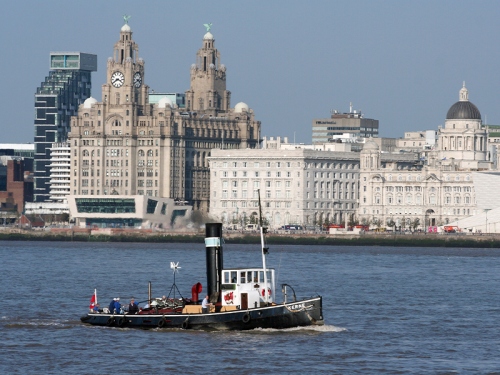 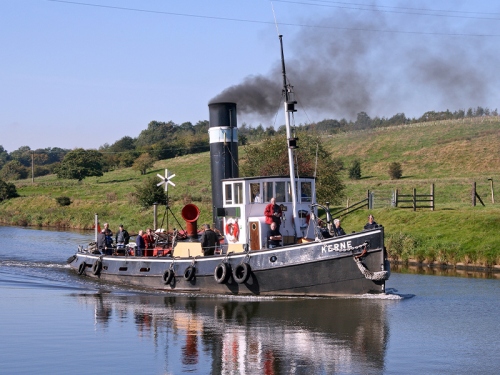 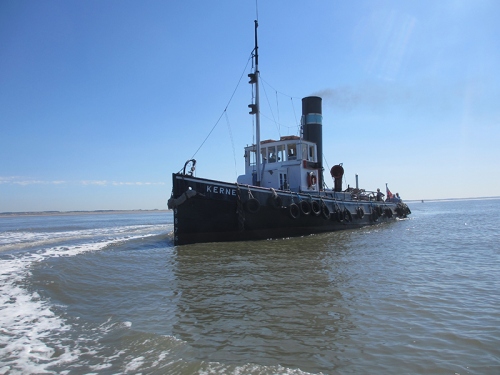 In 1971 a group of like-minded friends in their early 20s, feeling a little disillusioned with the early railway steam preservation projects locally, hatched the idea of preserving something steam powered that wouldn’t be confined by the regulations of the railways. Their endeavours brought them to the, then recently, retired steam tug, Kerne.

The vessel was originally called Viking and was built in Montrose, Scotland, in 1913. She was renamed Terrier and went immediately into Admiralty service at Chatham dockyard, serving there during both World Wars and throughout the interwar period. Indeed, it is believed she is the only First World War Royal Naval vessel to survive and still be in operation.

Peacetime saw her renamed for the third time when she was given her current name, Kerne upon being sold in the late 1940s for commercial service, initially on the Medway and then later, from 1948, on the Mersey.

By 1971, Kerne had been retired and was quietly waiting for the breaker’s torch when, at the eleventh hour, she met the group that was to become her salvation.

The friends formed themselves into the North Western Steamship Company. Mostly from shipping and engineering backgrounds, they were aware of the pitfalls of trying to look after a sea-going vessel over half a century old but set about the task with pragmatism and optimism.

Over the years, Kerne and her owners have had their fair share of ups and downs. High points have included being present in the Queen’s Silver Jubilee Review of Shipping on the Mersey in 1977 and being awarded the Queen’s Award for Volunteer Service in 2018.

The group formed a charity, The Steam Tug Kerne Preservation Society, in 2008 and it is through that organisation, its members and friends, that principally the same group of people continue to maintain and operate Kerne in the coastal and inland waterways of the North West of England.

The cost of heritage preservation, however, is considerable and is ever increasing. The group is faced with many expenses that have grown considerably over the time of its ownership and some that weren’t even a consideration when the group was originally formed.

As is to be expected with a vessel that is 108 years old, there is a constant battle with wear and tear, especially from corrosion caused by the salt-water environment in which she spends most of her time. Over the years of ownership, as well as keeping pace with the requirements of regular regulatory inspections and repairs, much has been done to improve the vessel. Most of the deck and a large proportion of the hull have been replaced, as have internal supports and frames that had reached the end of their life. The engine, a three cylinder triple expansion steam engine, has been thoroughly overhauled and the coal fired boiler, built by the Admiralty in 1935, is currently undergoing a heavy maintenance programme, a large part of which entails replacement of all the stay tubes; heavy work which is being carried out by a small band of dedicated volunteers. This will be completed in 2021.
The forward cabin, a beautiful example lined in English Oak with period fittings, has been restored to original condition and the wheelhouse has been replaced with a brand new, hand-crafted hardwood example.

The vessel has been regularly drydocked and is now in better condition than at any time since her purchase 50 years ago.

These projects alone, whilst contributing considerably towards ensuring the long term survival of the vessel, have not been cheap. The endeavours of this year alone have cost in the region of £40,000. A considerable sum for a small organisation to find. Combined with this, the current Covid-19 pandemic has deprived us of any of our usual exposure at festivals, museums and events that would normally have generated donations from the general public and has also meant the loss of a lucrative filming contract.

For its efforts, the group has been granted several awards over the years:

Young Volunteer of the Year Award (for R. Dibnah)
Queen’s Awards for Voluntary Service (the equivalent of an MBE awarded to a group of volunteers).

This year will see a continuous 50 years of owing, running and maintaining Kerne and to mark it, the Preservation Society is launching its Golden Jubilee Appeal.

The aim is to raise £10,000 over the year that will aid completion of the current projects and provide a financial foundation to help Kerne continue to give great pleasure to many as she steams around the North West, presenting both an elegant and rare (if not unique) example from a bygone age and the compelling power of steam.

Any donations will be gratefully received via the appeal pages on our website - www.tugkerne.co.uk, by Facebook, by cheque (payable to The Steam Tug Kerne Preservation Society and sent to STKPS Treasurer, Bankside House, Haugh Road, Todmorden, Lancs, OL14 6BU) or by arrangement with the treasurer: treasurer@tugkerne.co.uk