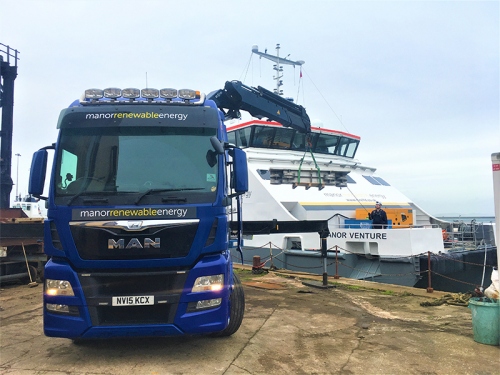 The Manor Venture has returned to Manor Renewable Energy’s Portland site for the first time since July 2018, after 20 months at sea and the successful completion of 4 temporary power projects.

The Venture continues to break boundaries in offshore wind and has maintained a reliable service throughout this period, while accommodating her 12 crew offshore for up to a week at a time. On the most recent project, MRE utilised her unsurpassed deck space to demobilise their temporary power sets, carrying five at a time back to shore.

During the time the Manor Venture has been at sea MRE has seen vast changes within the company; with the acquisition of Manor Marine UK Ltd more than doubling their workforce and a quickly expanding fleet, there are exciting times ahead.

The Manor Venture will now undergo a short refit period at MRE’s Portland shipyard before embarking on the next chapter.