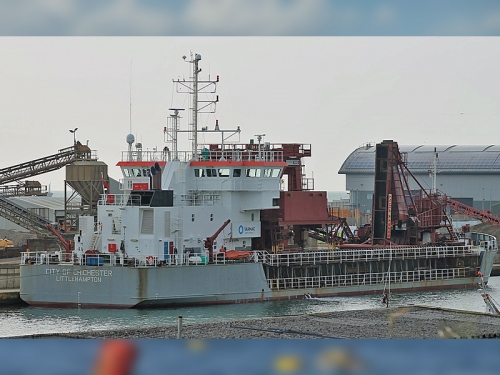 SMS Marine Southampton has completed a significant dredger refit in the port of Southampton for Tarmac Marine.

SMS Southampton, the city’s leading ship repairer, part of The SMS Group, has completed the major refit alongside on berth number 20/21 in the Western Docks for the Chichester-based aggregates company Tarmac Marine.

SMS has an enviable reputation as specialists in ship repair, marine engineering and major fabrication projects in the commercial marine, defence and superyachts sectors.  The company also operates a diving and sub-surface marine engineering business.

The ‘City of Chichester’ was built in 1997 and has been maintained to the high standard by Tarmac ever since. The refit was completed in a dedicated, controlled berth alongside at Williams Shipping’s berths in Southampton.

SMS took ownership of the site, to include permits-to-work and site security, as well as the program of repair works – at all times adhering to Tarmac’s stringent, professional and proven health and safety policy.

The program of works undertaken was extensive; to include, but not limited to, the Feeder Hopper refurbishment (completed in SMS’s nearby workshops), the Discharge Grab replacement, a routine number of general repairs to the dredge and discharge equipment and a significant quantum of pipework repairs, renewals and bespoke fabrication/manufacturing.

Dave Chaffers, General Manager of SMS in Southampton, said: “The package of works was extensive with some significant emerging challenges; that said the team at Tarmac, both on and off the ship, supported the refit tremendously.

“Our ‘can do’ attitude, health and safety awareness, and in-house multi-trade expertise genuinely helped to deliver the works on schedule and on budget.”

He concluded by saying: “It’s been a pleasure to work with Tarmac and a great result for SMS to complete the works here at home in Southampton.”

Duncan Payne, Ship Manager, Tarmac Marine Ltd, said: “Working with Dave and the SMS team in Southampton has been a real pleasure.

“Given the challenges of the project we’re very pleased with the outcome and look forward to future works with The SMS Group.
“I’d also like to go on record in support of the facility here at berth 20/21 and compliment Williams Shipping on their approach to this tri-party partnership; collectively we made the refit a success.”